There is a light side, a bright side, on the other side of every shadow. The luminous part of not having a family for the first two years of his life is the way Arie delights in being part of ours now. He walked through his birthday celebrations with pure awe and wonderment. Being witness to his joy this weekend was bliss. Just, bliss.

My parents, brother Wes, and sister-in-law Kaitlin arrived on the afternoon of Arie's birthday, Friday June 7. As I posted before, he had been looking forward to his birthday with unrivaled anticipation and he knew their arrival marked the beginning of their celebrations. Early in the morning on his birthday, John and I surprised him with a ceiling full of ballons and took him outside to see his present- a sandbox- which he loves, but the real party didn't start until he got cake. And for that- we had to wait for Omi and Grampi.

They drove six hours to get here for Arie's birthday only to be bested by a cake. Three year olds...

We did enjoy cake after dinner that night. We sat outside so Arie could play in the sandbox while we ate dinner and when I brought the cake out from the kitchen the little guy almost fell over with excitement. He surprised us all by blowing out the candles with no prompting- leading us to believe that they must have celebrated birthdays in his orphanage- and scarfed down his slice without breathing. Or chewing. 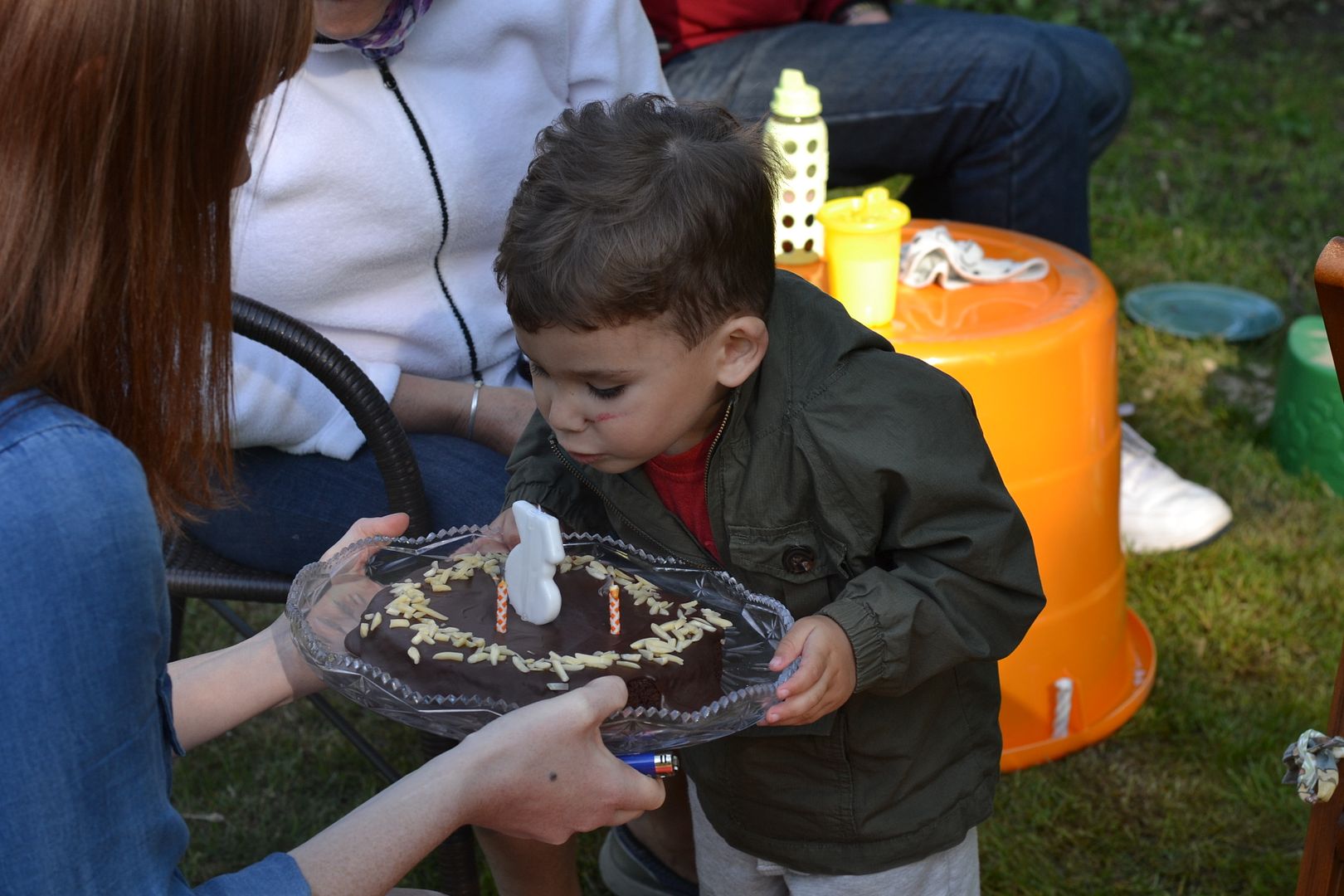 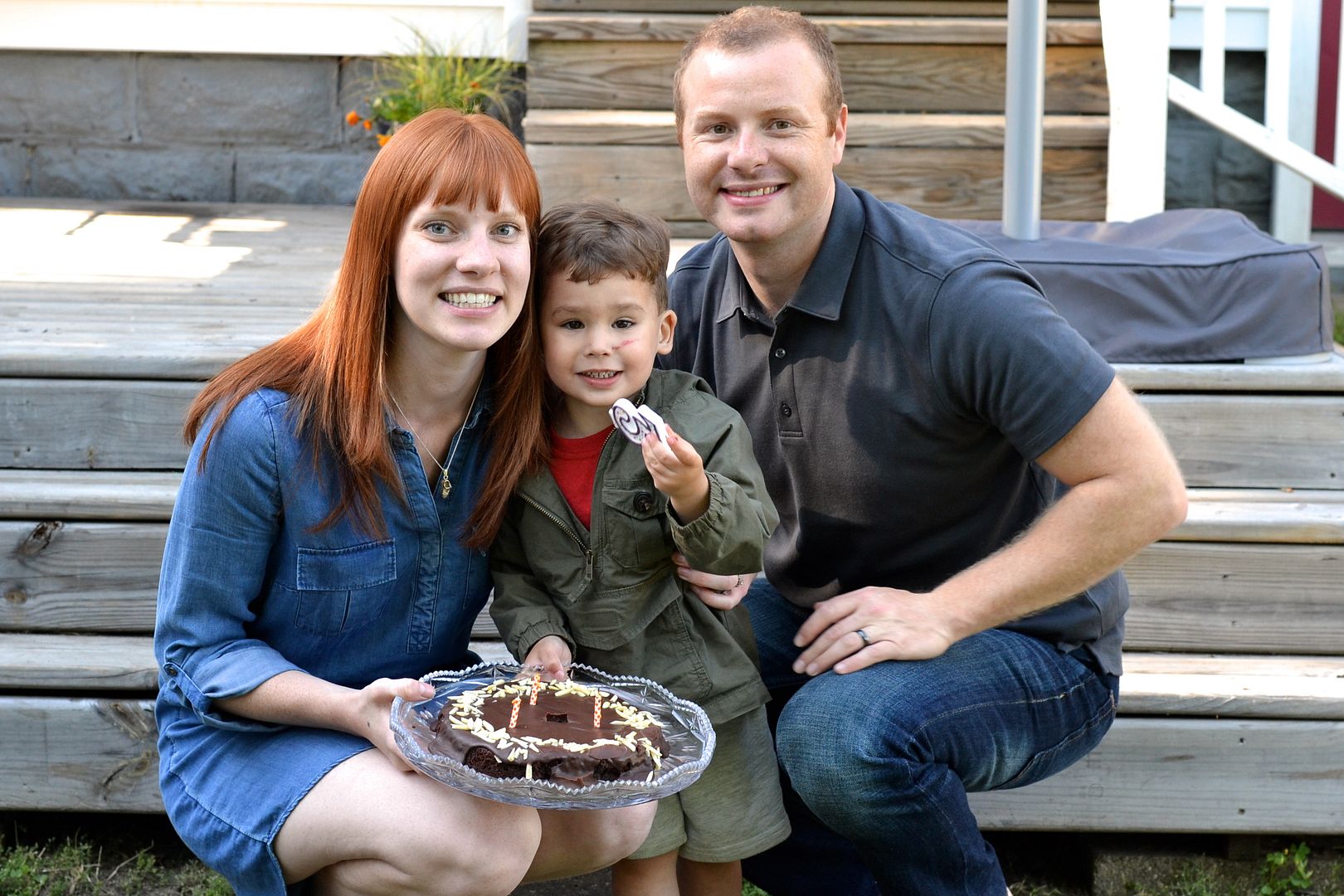 After cake my parents presented Arie with his gift: a new trike. They shipped it to me and when my mom pulled the pictured box out from the closet where I was hiding it, Arie's eyes got big and round and he exclaimed, "A BIKE?!!?"

Your very own bike, buddy. Just give us an hour to assemble it. 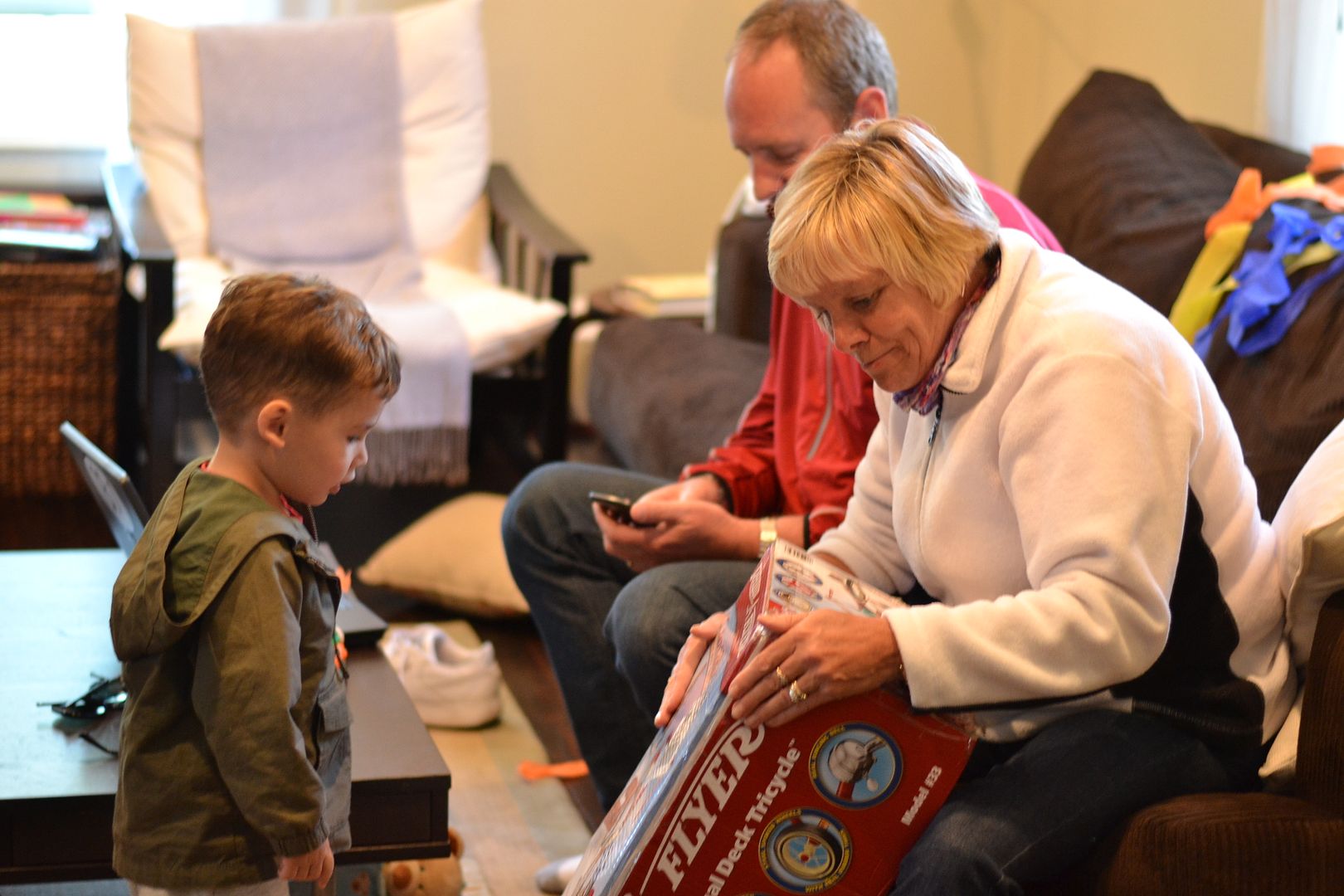 So far he's gotten the hang of mounting and peddling, but not steering, so I think John and I are going to be dealing with stiff backs for a while.

On Saturday we spend the morning cooking and decorating for the big party. We were so thrilled to enjoy perfect picnic weather and no major cooking disasters. I did forget to put out one cheese tray and a pile of diced melon, but hey- more leftovers for us, right? No one went hungry!

Despite all our conversations and prep for the party, Arie was shocked by his guests for almost the first full hour of his party. He kept looking around our backyard in silence, mostly concerned at the kids who were picking up all the pinwheels we had placed around the yard and using them to infiltrate his new sandbox. It took a bit of reassuring before he conceded that moving the pinwheels was okay and sticking them in the sandbox was also allowed. Our little rule follower.

After he warmed up to his guests, he ran around his party with happiness just radiating from his face. The kids, the food (well- the ice cream), the singing, the blowing out the candles (again), and the presents; it was three birthdays worth of fun. John and I wanted to cram in all the spoiling he missed from his first two birthdays and mission accomplished. Neither Arie nor we could have asked for a better party. If I had to describe the celebration in one word, it would be: abundant. It was three hours of abundant friends, abundant chicken and guacamole, abundant ice cream sundays, abundant gifts, abundant hugs and smiles and laughs, abundant love.

Though I didn't really consciously plan it that way, I think abundant is a good message to communicate at a birthday party. In a world where we are always worrying about running out of things- gas, milk, time, energy, money, affection, love- that we take an afternoon to gather round, to look at each other and one special little boy, and say we're not going to run out of this. There's always going to be enough of us for you.

When we gather, we do it under the name of a God who defines abundance. We gather under the name of a God who comes to us to give us life and life to the very full. His love is limitless and his blessings are without end. That's the very best name we could gather under. Our abundant birthday celebrations this weekend were a part of that life to the full that we humbly and happily claim.

Today we are exhausted, John and I, but we are so happy to have held in our hands such a beautiful, blissful party for our little man. For his birth, for his birthday, for our family, for our friends, and for the opportunity to celebrate together, abundantly, we are happy and blessed.