In 5 days- on June 7- Arie will turn four years old! Age three was the first full "year in a life" we were privileged to witness in Arie's life.

Most of our family life these days looks like any other family, but I still have intense moments every few days where I reflect on the profundity of his adoption. I will hear him playing make-believe in the playroom and remember how I longed to hear his voice when that room sat silent in our home. I will help him climb out of the bath and remember how once- in the early days after he came home- he caught sight of the two of us in the mirror after his bath and exclaimed, "Baby! Mama!" Oh how my heart glowed with joy to hear that blessed title on his baby lips. Mama. Yesterday he and I were in John's office at church where John has an old globe on display; Arie called me over and asked me to show him "Where Russia is?" Together we searched for his birth country and then again for his home in Michigan. I told him with emotion how we flew on an airplane all the way across the world to bring him home and in response he exclaimed, "AND I THEW UP ON THE AIRPLANE!"

Like most mothers, my heart is both happy and sad as I approach my baby's birthday. We have enjoyed  countless moments of laughter, joy, and pleasure over the past year. Yet is has also been so fleeting. Too fleeting. There is a thin little boy running around my house, talking ceaselessly, asking a million questions, and growing smarter by the day. Where did my baby go??? The chubby legs, the baby babble, the diapered bottom. The time has slipped away like sand through my fingers.

As I grapple with both the blessings that overflow my cup and the reality that yesterday is now gone forever, I find myself reflecting on this passage from Ecclesiastes 3:11-13:

[God] has made everything beautiful in its time. He has also set eternity in the human heart; yet no one can fathom what God has done from beginning to end. I know that there is nothing better for people than to be happy and to do good while they live. That each of them may eat and drink, and find satisfaction in all their toil—this is the gift of God.

He has also set eternity on the human heart.  I think that's why we parents feel those wistful pangs as we watch our babies grow. We have eternity in our hearts. We were not made for temporal life. We were not created to live life with an end. We were created for life without end. How that works itself out in terms of humans "growing up" in eternity, I don't know. I just know that we were not created to watch good things come to end.

Thank God he has not left us without hope! Hope for eternity found in Christ and also, incredibly, hope for today! An ability to be happy, to do good, and to find satisfaction in our lives. From June to June with our jubilant little three-year-old, we did just that! Here's Arie- age three: a year in review:

We kicked off Arie's three-year-old year with what else- a birthday party! Since we missed out on his first and second birthdays, we enjoyed a birthday celebrations worthy of three-in-one! Teddy Bear Picnic was the theme and we spent both the weeks leading up to the party and the weeks following trying to get that catchy song out of our heads! 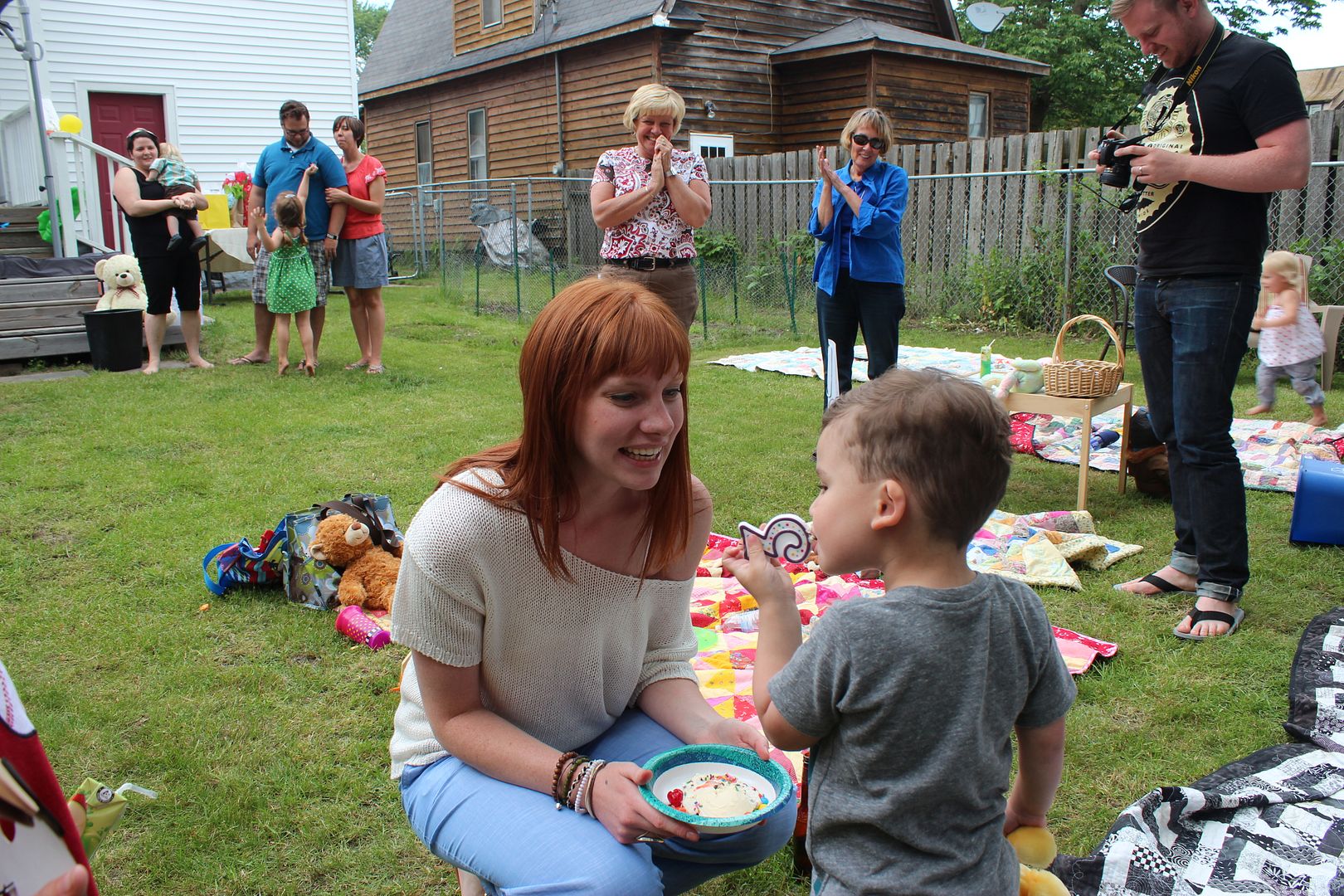 Later that same month my heart absolutely sang with pleasure as we went strawberry picking with a group of friends! Crouching in those fragrant fields with the sun on our backs watching my little boy sink his teeth in the sweet warm flesh of a berry, I could not have been happier. It was a literal dream come true to pick berries with my family!

In July John and I drove up to Ontario for Arie's first camping trip with my family! We went to the same campground my family has been going to since I was a little girl. Playing with my boy on the same lakeshore beach, biking the same paths, and making s'mores around the same fires was a  "full circle" kind of experience. Arie loved being spoiled by his grandparents and ate more chocolate candy that week than I bet in his entire previously life combined!

Later in July and back in Michigan we enjoyed a few days at our friends' cottage with their two daughters. Arie's little friend Josephine was very generous with affection toward Arie but Arie wasn't quite sure what to do with that much love! We still laugh with memories of her chasing Arie down the sidewalk and Arie yelling, "NO MORE HUGS!!" (He's since recovered and gets along famously with his little buddy!)

In August we went to heaven. Actually we went to Mackinac Island for the first time, but WOW that is the closest thing to paradise I've ever experienced! It was beautiful beyond description and the peace I felt as we biked around the island has remained unmatched. We don't have plans to return this summer, but I know someday we will!

The three of us joined family friends to go apple picking in the September. We picked many apples and- much to my surprise- ate almost the whole lot as-is. I tried to make applesauce with the leftovers with little success. Fingers crossed for a better second-try this fall!

In early October we celebrated the one year anniversary from our court date in Moscow! Standing before a Russian judge in Moscow who had the authority to make me Mama to my little boy was petrifying! I've never been more nervous in all my life! Praise God she says YES and one year later our family of three clinked our glasses on a Michigan terrace, enjoying a fancy pants meal in celebration. After dinner we celebrated by doing something traditionally Russian- going to a ballet!

Also in October we raked a lot of leaves, celebrated Thanksgiving in Ontario with my family, and introduced Arie to the great holiday of Halloween! Still his favorite, I think, because of the candy.

In November we went to a Russian Festival in a neighboring city and also celebrated Thanksgiving here in the US (no pictures of that! Whoops!).

December was our first "second" month as a family and brought Christmas!

In January we played with all our new Christmas toys and tried hard to enjoy the cold weather.

In February we tried again to enjoy the snow and actually had some success! We tried and loved snow-shoeing! John and I loved spoiled Arie for Valentine's Day too.

March kept on being cold. And snowy. And cold. Arie started many mornings by looking out his window and sighing, "Oh. It's still snowing." As soon as the temperatures peaked above 45 degrees, Arie and I celebrated the first whispers of spring with a trip to a local educational farm! We met friends there and enjoyed dreaming about a time when we would not have to wear hats and mittens and boots and coats ANYMORE!

Later in April we welcomed my parents, brother Wes, and sister-in-law Kaitlin to our home for Easter! The weather warmed up briefly but beautifully for their visit. Arie was spoiled once again with too much chocolate! I guess that is what grandparents are for???

Our big event in May was enjoying a local spring festival where Arie was thrilled to climb abroad multiple sketchy carnival rides with his papa. I stood by with a full heart, listening to his gleeful yells and laughed to hear him exclaim, "SUPER READERS TO THE RESCUE!" as he zipped by. Super Why for the win!

And now here we are in June again! John and I are throwing a smaller party for Arie this year with Arie's chosen theme "Pirates!" He's been talking about it for months and last week I had the immense pleasure of reminding him that he is going to get PRESENTS on his birthday. I think he forgot about that part! You should have heard him squeal! He's so excited. We're hoping to host his party outdoors at a park so *fingers crossed* for good weather. Cant' wait to share the party with you all next week!