One morning in the sugar bush

My good friend and fellow blogger Leanne Penny calls herself a "transplant" because she, like a lot of us, is living her adult life and raising her young family in a different state than the one she grew up in. A Michigan girl through and through, she currently makes her home in Oklahoma. Those are about as different states as you can get, aren't they?

A few months ago she came home to Michigan- close to where John, Arie and I currently live- for Christmas and she blogged about how hard it is to be homesick. Especially how hard it is to be raising her two children in a place that I'm sure seems like another world at times.

I'll tell you a little personal detail about myself: I'm not very big on sentimental reminiscing. You might guess from all the pictures I take that I'd be a big sap for the past, but I'm not. I like to look at old pictures and share memories once and a while, but what I mostly refuse to do is get wistful. When John and I drive back to the city we lived in before this one, he always asks if we should drive by our old apartment. I usually say no.

If I phsycoanalyzed myself I think it's because of two things:

Once when I returned to college after spending a summer home in Ontario I went through a terrible bout of homesickness. It probably lasted about a month and it was an awful, awful feeling. When I eventually came out of it I decided I never wanted to feel that terrible again and ever since then I've worked really hard to try and live in the moment, as cliche as that may sound. When I'm thankful for the life I have right now I'm much less likely to get stuck in that homesick feeling.

The second reason is because of a very small but profound moment in my life. I spent the better part of two years working as a nanny for a wonderful family when I was in college/in-between college and seminary. I spent much of my time marveling at how big they were getting while I cared for them. Moving from infants to toddlers (and it does happen so fast!). Then, about a year after I finished working for them, I was looking at some old pictures and I thought look how little they were! Suddenly I was struck with the fact that I had spent their babyhoods thinking about how big they were getting and I practically missed how little they actually were.

I thought to myself that when I had children of my own I would determine in my heart to appreciate their littleness. Now that Arie is home I'm realizing how hard this task truly is! This picture from our flight home really shows me how much he's grown in the past three months and gives me a pang as I wish to go back to that day and remember how small he was:

Then I take a deep breath and whisper a prayer that goes a little something like God make me present in this moment. Don't let me get so lost in yesterday that I miss this day. I know that too soon I will look back on this particular early March day, and feel that same pang for his littleness. Since he's here right now on this day, I'm determined not to miss it. Maybe this is my own small way of living into that well-known Psalmist's verse, "This is the day the Lord has made; let us rejoice and be glad in it." This day.

But back to the issue of being a transplant and raising your children where you didn't grow up.

I grew up in Ontario (Canada) and I'm raising my little boy in Michigan. Thankfully these two places aren't as different as Michigan and Oklahoma, but since they're in two different countries they do have their distinctions. While I'm very happy with the life we've been given here, I look for little ways to bring a little bit of my Canadian childhood into Arie's childhood.

One of the things I loved about spring in Ontario was the field trip our primary school always took to a sugar bush- a maple syrup farm. In my mind I can still see the steam from the sugar stack rising and dissipating in the air. I remember the cold on my face in contrast with the warmth of the fresh maple syrup we got to taste. I remember the sweet taste and sticky residue of the syrup we received and I remember how disappointingly small was the little white paper thimble that held it. I wanted more than that little taste! I wanted a gallon. And a straw.

On Monday, something about the melting snow and the hint of humid warmth in the winter air reminded me about my childhood sugar bush experience and I pulled out my phone to see if there was a similar place where I could give Arie that same experience.

It must have been destiny because low and behold a local farm was having their yearly maple syrup event this very weekend!

Steam rising from a sugar shack.

An old barn. Red, of course.

Silver metal pails spotted all through the woods, an obvious but somewhat stark contrast to the otherwise natural scene of old leaves, mud, bark, and snow.

Something new to me: a demonstration of old Native American maple sugar techniques. After it was collected, the sap was poured into this wooden vat, carved from a log. From there is was heated by  hot rocks, placed right into the sap and boiled until it became dry sugar. 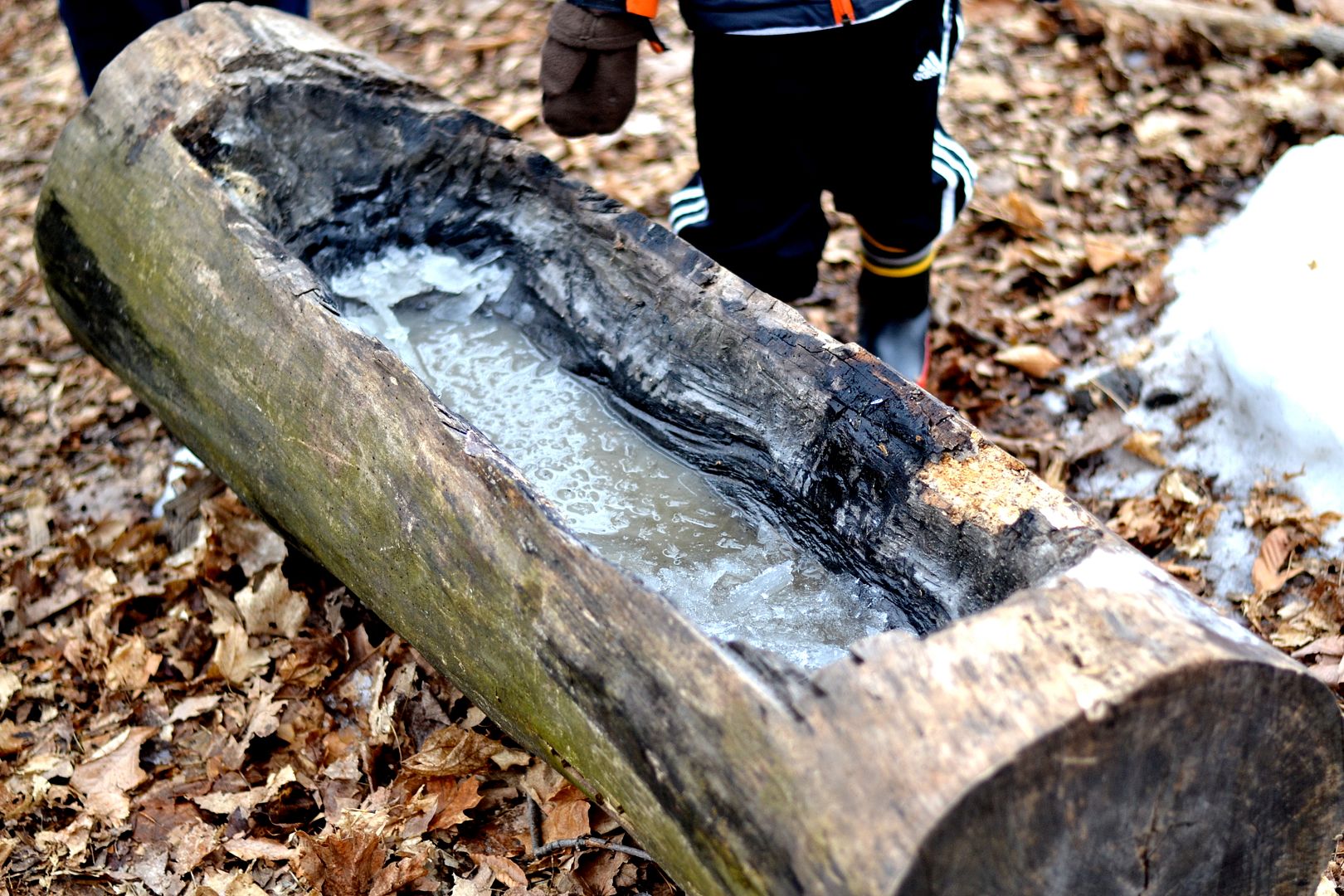 My favorite part was the smell from this fire. It hung in the air though the entire sugar bush and made us feel somehow cozy, even in the big wood. I keep brushing my hair to my face to smell that toasty campfire scent that always seems to somehow get inside my locks. But I don't mind. I'll just say I'm taking the morning with me into the rest of my day.

The highlight for every child: tasting. This particular farm served those little while paper cups filled with not-enough-syrup alongside vanilla ice cream. 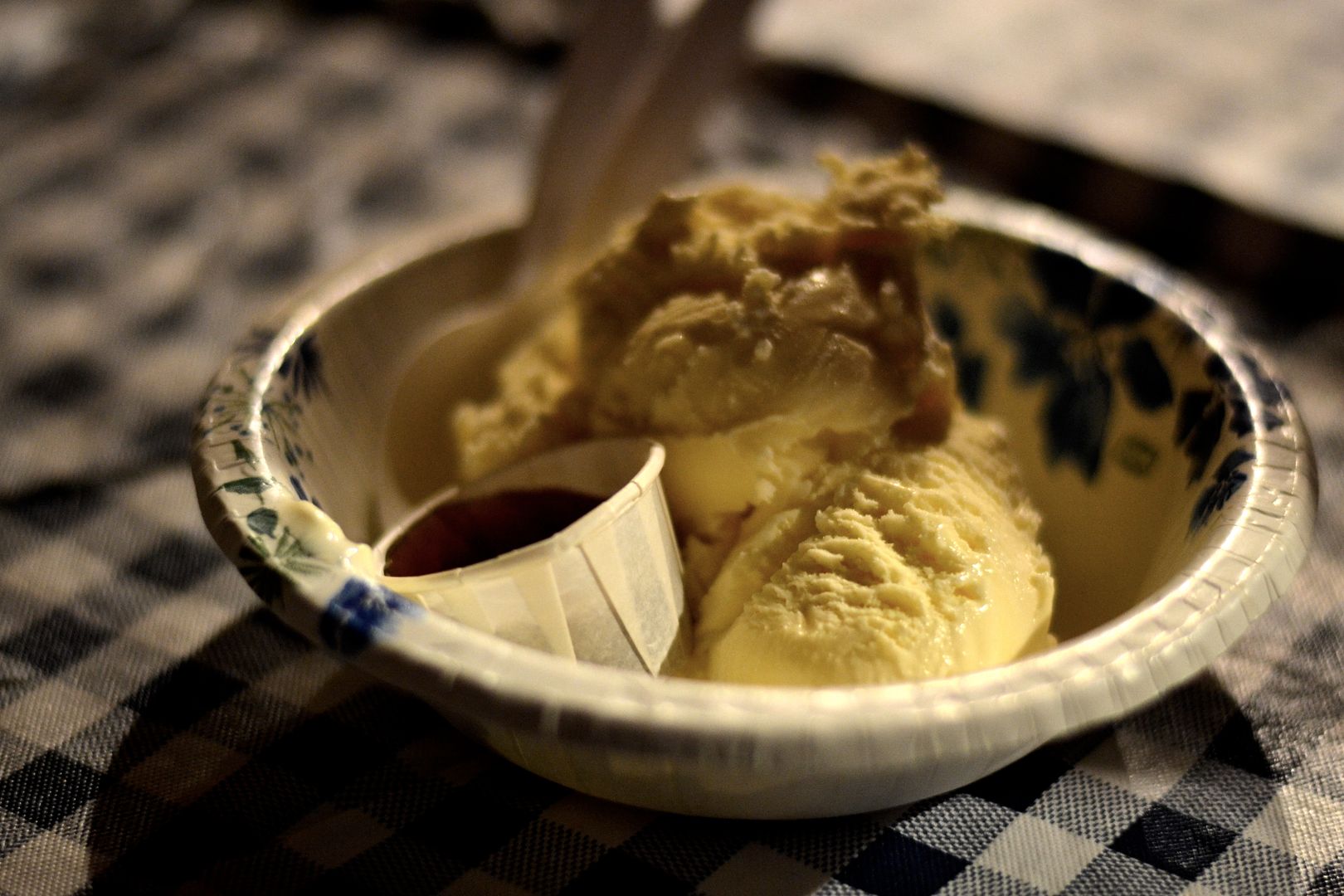 Basically, we had ice cream and maple syrup for lunch. Arie was in heaven.

A taste of my childhood, for my son. To me this is the best part of reminiscing: bringing a memory forward and cherishing it for the joy it brings in this present moment.

A memory shared, a new one made, and a beautiful morning in the sugar bush.