Usually it's a hot cup of tea after Arie and my daycare babies have been put down for their naps. Some lay sprawled out like starfish, bellies open to the air while others curl on their sides, little fists tucked under their chins. I tiptoe around to their respective rooms to watch their chests rise and fall or listen to the soft rush of air coming in and out of their noses. When I know they're safe and sleeping, I turn on the kettle and wait for the whistle. A hot cup of afternoon tea and a moment to sit and breathe.  Just the thing.

This weekend our family of three got our just the thing to rest and enjoy the winter. 48 hours in Northern Michigan with white snow and blue skies. Two days in an adorable little cabin, no wifi, no work phone (for John), and no agenda. A weekend, just the three of us, to be nothing except a family.  It was just the thing.

This past summer John and I found, somewhat by accident, this lovely little rental place.  We knew we wanted to go North to see the famous Sleeping Bear Dunes in our home state, but we had a hard time finding accommodations we could really afford. John stumbled upon a terribly designed website for a group of little cottage rentals and I almost said no because really, the website was just that bad. But he asked me to just at least try it so we did and we walked into such a good thing.  A quaint little home away from home, perfectly decorated, cozy and clean, and hosted by the most hospitable couple. It's the kind of place where you have to jiggle the toilet handle so the water stops running and where you learn to be careful where you put your coffee cup because the kitchen table's a little crooked, but those are the kind of things that can either be flaws or character, depending on eye of the beholder, aren't they? We choose character.

All weekend long on our trip last summer we talked about taking our little man up there when he came home. Getting him up there with us was a literal dream come true.

We spent our evenings with books and chocolate and wine...

....and our mornings with eggs and sausage.

The food was wonderful but the weather was even better. Cold enough to make the snow crunch beneath our boots, but still warm without a wind.  The son shone brightly on our faces through thin clouds, tiny frozen droplets from God's very breath as he whispered goodness over his creation. Pine trees held fluffy pillows on each branch and every inch of both field and forest floor shimmered white. It was the absolute best of a Michigan winter.

If you know me, you know I don't really do anything particularly athletic.  In fact, if you throw your keys or an extra apple in my direction I will probably duck rather than catch it. I don't snowboard or ski or even skate. There's not a lot for me to do in winter. But I will do one thing.  I will always toboggan. Put me on a sled and send me hurdling down a hill and I will have a blast. Just be sure to get out of the way because there's not a chance in hell heck I'll be able to steer it.

In light of my love for this one particular winter activity, John and I wanted to take Arie sledding on our winter vacation and we were in just the spot. Get this: you can toboggan down the Sleeping Bear Dunes! For serious. In the summer this particular dune is selected as the "Dune Climb" where tourists (including us) try their best to climb all the way up to the top to catch a spectacular view of Lake Michigan.  It's a long hike. What you see in these pictures is only the first "hill"- about a third of the way up. In the winter, those who forgot how hard it is to hike the dune in summer strap on their snow pants and lug their sleds up to the first hill. And those of us who are us do it with a two-year-old in tow. 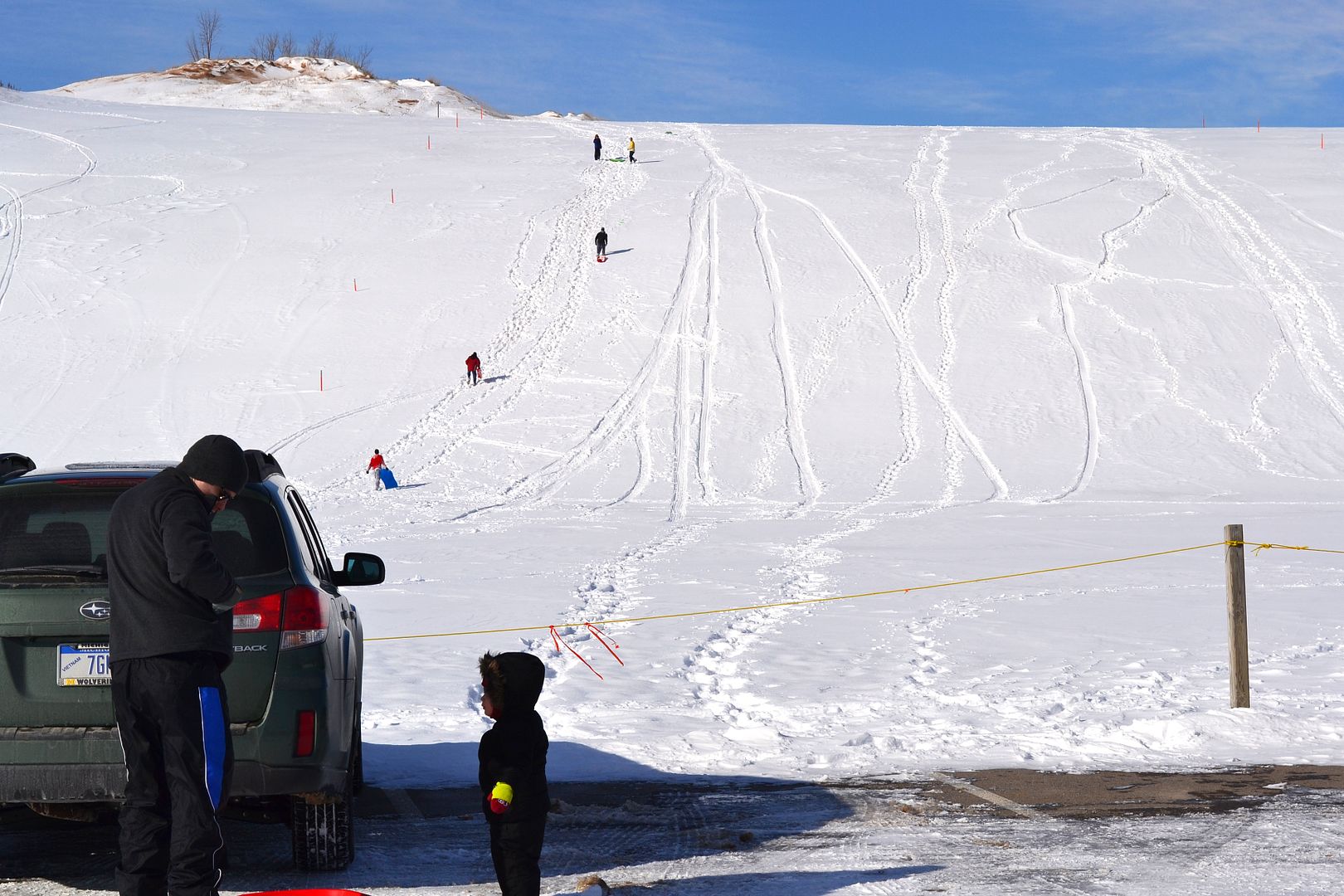 We only made it up and down six times before our bodies gave out from exhaustion but wow. It was worth it. We were three of eight people on dune and I in particular loved racing downward on our red plastic sled, snow spraying in my face, lungs drinking in the cold air.  At the bottom, after tumbling out into the snow (never had a graceful landing, another evidence to suggest I should stay off skis), I would breathlessly exclaim to Arie, "Isn't that FUN?!" Arie would look at me and with a look of inexplicable boredom shake his head no.

Aghast at his reaction, I'd lay him on his belly in the sled to pull him back up the dune, shouting to John something about how I don't know how anyone would think this wasn't fun, and Arie would start giggling and shouting MORE! with full bodied two-year-old glee. He couldn't care less about going down the mountain, but going up? That was the best part.

He should tell that to my jelly legs.

At the end of our runs down the dune, John and I took turns sitting in the snow with Arie while the other went up alone for a solo slide. Arie would shout to us, "YAY PAPA/MAMA YAY!" as we whizzed by, making the trip down that much more fun. When we finally buckled him back into the car, he shook his head a hundred times no, repeating the phrase, "More outside! More outside!"

I guess we'll have to go back.

In addition to our time at the dunes, we spent our hours cuddling and cozy-ing up in the cottage,

and stopping at this little shop for all things cherry.

Arie quite enjoyed all the taste testing at this cherry shop.

As we left the little cottage behind us and drove home again, it began to rain.  All the beauty of that shimmering snow faded away.  Chunks of snow slipped off pine tree boughs outside our windows. Slush from car tiers sprayed in every direction, dirtying our windshield and turnings the road's shoulders brownish grey. In my mind there's few things as disappointing in nature as a winter rain and all the cold, gritty mud it brings.